Paul Masincup passed away last weekend. He an operation to remove a tumor in his colon, but his intestine ruptured and he developed septicemia.
Posted by Dave at 6/30/2013 02:32:00 PM Links to this post


Paul Masincup obituary
Paul F. Jr. 65, of Bergenfield passed away on June 23, 2013.  Beloved husband of Linda Tett Masincup, his wife of 43 years.  Loving father to Sandra Ille and her husband Paul of West Milford, Brian Masincup of Fairlawn, and Courtney Masincup of Vernon.  Cherished grandfather to Jonathan Heims.  Also survived by his sister, Joanne Abdulla of New Milford, his aunt Ann and her husband, Bob Kilpatrick, his sisters-in-law, Sharon Tett and Kathleen Dellavia and his brother-in-law, Mark Tett and his wife Louisa, and his 14 nieces and nephews.
Paul worked for CBS television as a technical supervisor in the transmission center for 42 years until his retirement in 2012.  He won a Sports Emmy Award for Outstanding Technical Team-Studio for Transmission of the 1998 Olympic Winter Games in Nagano, Japan.
He was an exempt member of Prospect Fire Company in Bergenfield.  Paul served in the U.S. Air Force as a communications specialist in Guam and Vietnam.
Besides his love of family, Paul was a dreamer, a published author, an award winning photographer, and an avid gun enthusiast.  He and his wife Linda loved to travel, and recently fulfilled Paul’s dream of a Trans Atlantic cruise from England to New York.  He was his grandson’s #1 fan for all his baseball games.
Add arrangements …..
Donations to the Bergenfield Fire Department would be greatly appreciated.
Posted by Dave at 6/25/2013 01:39:00 PM Links to this post 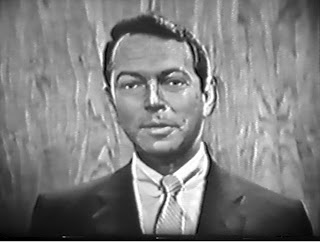 Making a rare on camera appearance, is CBS staff announcer Hal Simms.
the show is "Stand Up and Be Counted" from 1956.
Feel free to pass the picture around and let me know if you have any stories or trivia about Hal.
Hal was the announcer on, "What's My Line", from 1956 to 1961, and later on, "The Edge of Night".
Dave Schwartz