Hi! and greetings from the UK.
We are the BBC VTOldBoys, the retired engineers and tape editors of BBC Television's videotape recording department. Our interest period is the golden age of TV - mainly quad recording through 1" and to the edge of the digital era.
Do have a look at our website http://www.vtoldboys.com/
And our friends and colleagues in the BBC studios (tech ops as they were known at the time) have their own site http://www.tech-ops.co.uk/
I discovered your site while googling for sources of remembered knowledge of old broadcasting kit. We need some help in identifying the audio recorders in these photos. Can any of your members help? 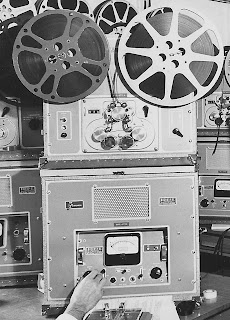 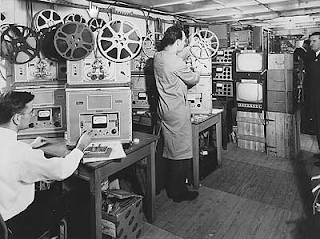 The machine is undeniably of North American design, but what is it? We think, by enlarging the name plate, and screwing up our eyes to read it, that it says Picinsync, or similar. There is a suggestion that the machines were recording a French commentary - could it be Canadian? Picinsync isn't known to Google and unfortunately I can't find any club or association for retired CBC engineers to ask them.
It would be great if any of your guys can throw any light on the mystery.